In this quick guide to inks we'll cover the toxic and environmental impacts of inks and the various alternatives available. At the end there's a quick summary of inks that don't deink - important information that may change your choice of printing! 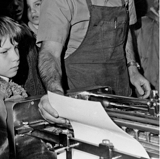 Traditionally inks used in the professional printing industry have been petroleum-based.  These were introduced in the 1960's as they dried a lot quicker than vegetable-based inks. These petroleum-based inks enabled printers to run jobs faster and increase overall productivity.

Volatile organic compounds or VOCs  - enable the ink to dry very quickly.  Many VOCs are dangerous to human health or cause harm to the environment. Due to these hazards VOC exposure is regulated in the workplace.  Inks do not necessarily give off their entire VOC content. In lithographic inks, very little of the ink oil used actually evaporates. Petroleum-based inks contain 30-35 percent VOCs. 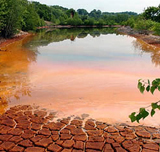 Heavy Metals - are found in the pigments of some inks. Barium, copper and zinc can be found in some pigments. They are most often found in metallic inks that are green, orange or opaque yellow. Heavy metals are toxic and sometimes carcinogenic and do not biodegrade.  Instead they can leach into soil and groundwater from landfill sites and cause major problems to rivers and groundwater supplies. 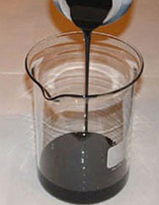 Non-renewable oils
Petroleum-based inks are based on a non-renewable resource.  We can't grow more petroleum or crude oil. Check the sustainable graphic design blog from more information on the impacts of oil use and the phenomenon of peak oil. All good reasons to reduce our reliance on petroleum-based products.

Vegetable-based inks
Both soy and vegetable inks are made from renewable plant material and can help reduce VOC emissions. Soybean oil-based inks range from 2-5 percent VOC. One major problem with soy ink is that it takes more time to dry than petroleum-based inks, due to its lack of evaporative solvents in the form of VOCs.
The term "soy-ink" does not necessarily mean that the ink is 100% soybean oil. In fact, inks may contain only minimal amounts of soybean oil and still be marketed as a "soy-ink".  Printing ink manufacturers in the US can use a SoySeal® logo with various percentages of soil depending on the type of ink. See here for the percentages of soy in the ink.
Here's a link to the SoySeal logo.

Soy ink is primarily used in lithographic printing processes, including newspapers, books and magazines. Coloured soy inks have penetrated the market at a faster rate than black soy inks. The reason being that petroleum is dark, while soybean oil is relatively clear in colour (see above photo of the really dark petroleum-based oil). This allows the pigment to be seen more readily and results in brighter colours. A more visible colour enables a given amount of soy ink to produce more impressions than the same amount of petroleum ink, which translates into a 5-50 percent increase in transfer efficiency.

Biodegradability
Soy inks are more biodegradable than petroleum inks. As the percentage of soybean oil increases in an ink formulation, biodegradability increases.  The total amount of ink makes up less than 1% of the paper waste however the deinking process produces a sludge waste of about 20% of the paper mixture when paper fibre is recycled.

Read more about biochemicals and in particular soy inks by downloading this pdf from pneac.org.

Soy What?
Here's a simple infographic from christineparkdesign.com representing the benefits of using soy-based inks - follow the link for the large version on her website. 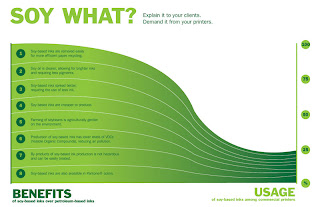 Recycled Inks
These can lessen the environmental impact of printing. Inks are not recycled in the same way as paper, plastics or glass and can't be recycled once they have been printed. Some ink providers can reuse old or spent inks by blending them together to form other, usually darker colours or black ink. 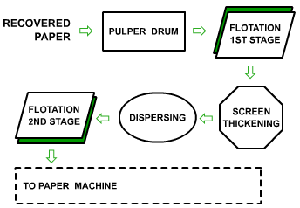 Deinking
Deinking is the key process in paper recycling. Hydrophobic (water-repellent) ink particles are separated from hydrophilic (water-wettable) fibres. This process has been developed for offset and gravure inks which are roughly more than 95% of the current recovered paper mixture.
Current water based inks create problems as they cannot be removed in this process and accumulate in the system. Dyes and ink particles too small to be removed have no other exit than in the paper fibres. They stain them just as red socks make your white clothes go pink in the washing machine.

Check out the list below of inks that cause problems during the recycling of paper and don't de-ink! 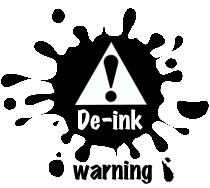 Inks that cause problems and don't De-ink:
To find out more about Deinking visit the International Association of the Deinking Industry at ingede.org
They also have the Deinkability scores here.

If you want to read more about the principles of ink check out paperrep.com.

For more Quick Guides for sustainable graphic design go to the quick guides page, or use the links in the top right hand column.
Posted by tobyonline at 15:02